Palazzo Corsini is a late baroque building, obvious throughout its many architectural details - from the roofs decorated with statues copied from antiquity and terra cotta vases, the ornate rooms and interior grotto, and the main, U-shaped courtyard that opens towards the lungarno and north bank of the Arno.

The two men responsible for Palazzo Corsini were Bartolomeo Corsini (1622-1685), the son of Filippo Corsini and Maria Maddalena Macchiavelli and, Filippo son of Bartolomeo's son (1647-1705) who expanded the portion of the Palazzo that extends towards Ponte Santa Trà­nita.

The construction continued non-stop for 50 years. The magnificent decorations, that were done between 1692 and 1700, belong to one of the finest and most intense moments in Florentine painting. The family commissioned several artists to decorate the noble apartment on the first floor, that includes Galleria Aurora, the Salone, the ballroom and other important rooms with work by Anton Domenico Gabbiani, Alessandro Gherardini and Pier Dandini.

Today the Palazzo is used for many important events and can also be rented for private affairs. The official website: English | Italian

Below is a history of the Palazzo Corsini from the 1905 book "Florentine Palaces, And Their Stories" by Janet Ross - some of the scholarship from that day may have changed since! 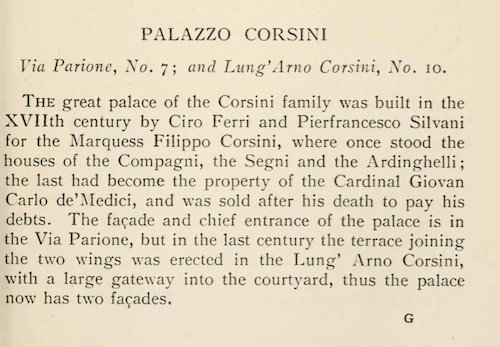 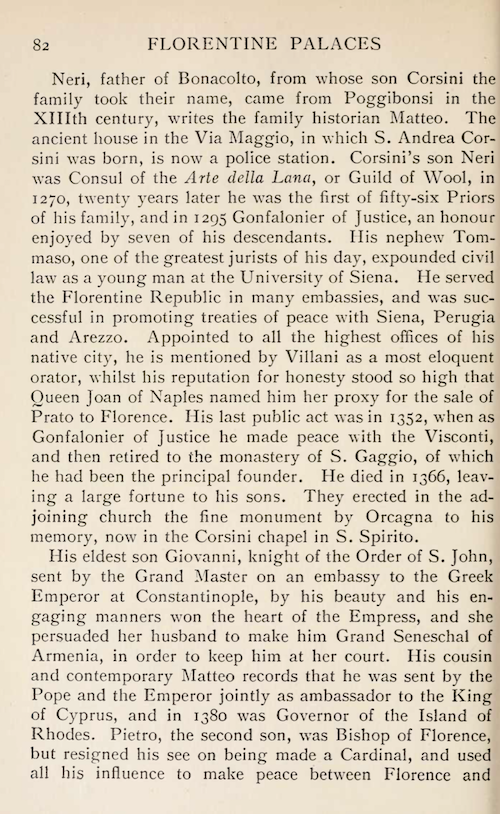 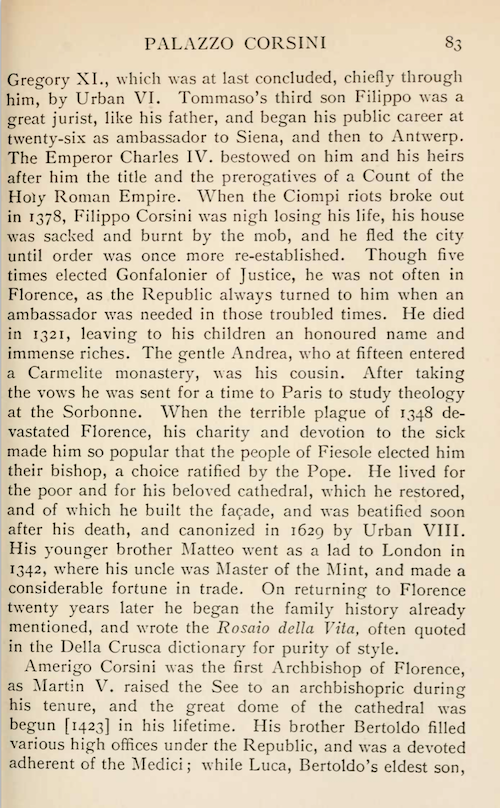 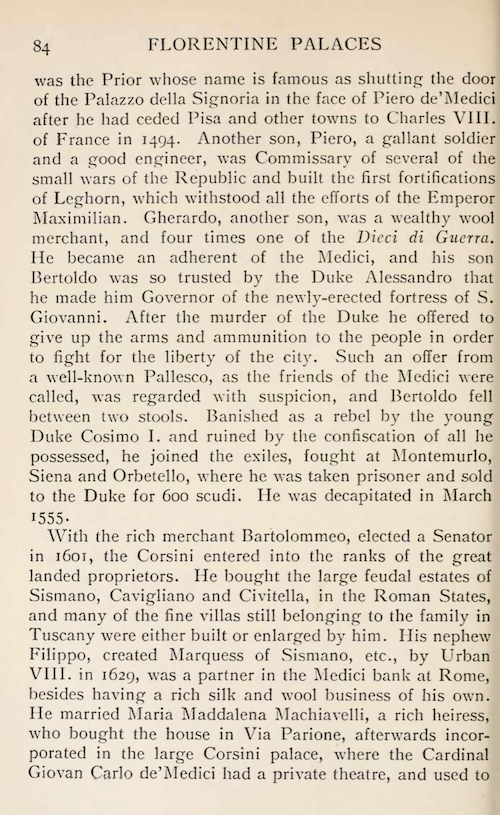 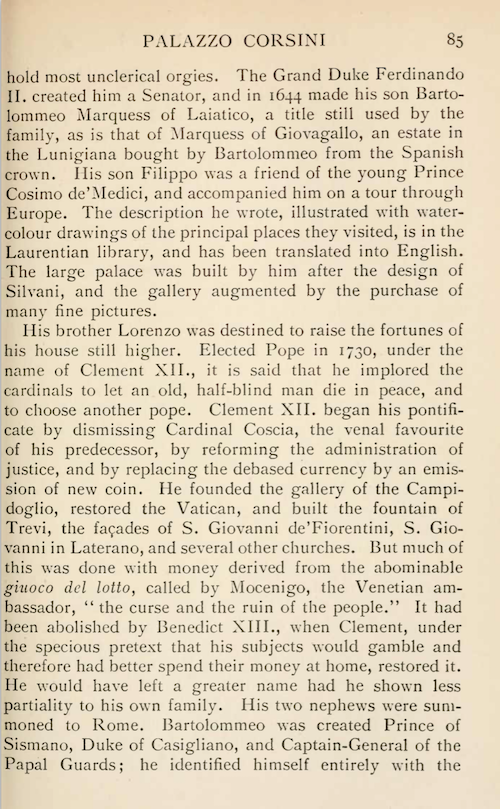 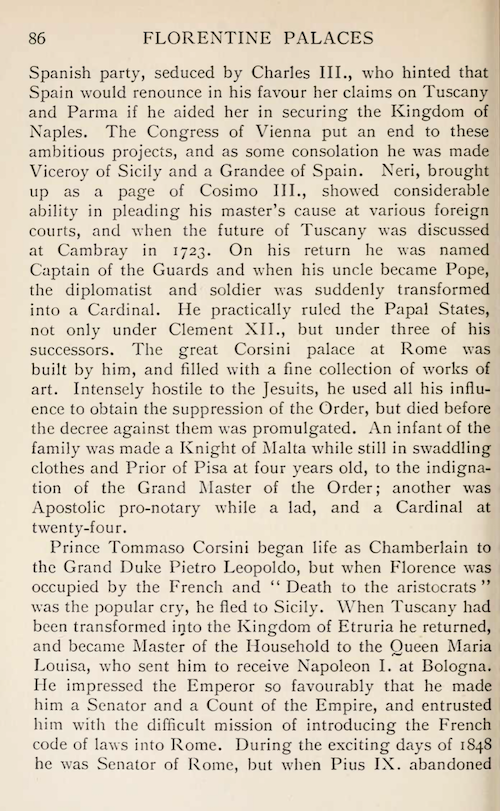 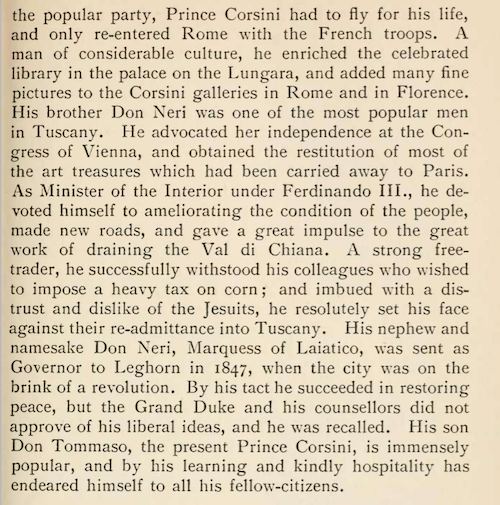 The Mille Miglia or the "thousand miles" has been called the "most beautiful race in the world". Initiated in 1927, the race was canceled for reasons of safety in 1957 and twenty years later was revived as a road rally.

Every May over the course of three days, more than three hundred of the most important vintage racing cars (and some contemporary models) from around the world parade through over 1,000 miles (1,600 km) of Italian roads highlighting countrysides, mountains, ancient villages and city centers including Piazza del Campo in Siena and Piazza Signoria in Florence. Starting in Brescia, Lombardia they travel to Rome and back, winding through the countrysides of the Veneto, Marche and Umbria regions and returning through Tuscany, including Siena and Florence where they pause for a mid-afternoon break. The collection includes pre-1957 models of classic cars from Ferrari, Maserati, Porsche and Alfa Romeo, among others.

The first car passes through Florence in the early afternoon and makes a tour through the center - in 2012 the race is scheduled to cross the Ponte alle Grazie, Lungarno degli Acciaioli and Piazza della Signoria (the exact time and route is subject to change from year to year).

Here are some of our favorite photos from the last couple of years: 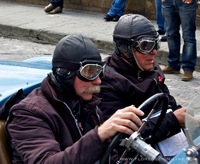 The Piazza della Signoria is the historic, artistic, political, and emotional heart of Florence. The most prominent feature of the Piazza (among many) is the Palazzo Vecchio, Florence's town hall, where the mayor still keeps his office. The current "L" shape of the Piazza is due to the razing of some medieval buildings during the Renaissance.

To the right of the Palazzo is the impressive arcaded Loggia del Lanzi - built between 1376 and 1382 by Benci di Cione and Simone Talenti, it was originally called the Loggia dei Priori since it provided shelter for outdoor ceremonies marking the change of the priori, or city rulers, which took place here every two months. To this day the loggia provides free, covered seating for tired tourists amongst its treasures of Renaissance and ancient art. In addition to some heavily restored Roman statues of lesser historical import, the loggia is home to Benvenuto Cellini's 1545 bronze "Perseus" (the original is still in situ), a tour de force of bronze casting, and Giambologna's spiraling Mannerist "Rape of the Sabine Women" of 1583. The "Rape of Polyxena" by Pio Fedi and Giambologna's "Hercules and the Centaur" can also be found in the loggia.

Several other notable works of sculpture adorn the Piazza della Signoria. To the left of the door of the Palazzo is a marble copy of Michelangelo's "David", marking the location where the original stood from 1504 until it was removed to the Accademia in 1873. To the right of the door is Baccio Bandinelli's "Hercules and Cacus" from 1534. A copy of Donatello's diminutive (compared to the other sculptures) but powerful "Judith Slaying Holofernes" (originally in the Palazzo Medici but taken to this location when the Medici where run out of Florence) in bronze is also located in front of the Palazzo. To the left of the Palazzo is the Neptune Fountain whose main figure in marble bears the features of Cosimo I, sculpted by Ammannati. The fountain is also surrounded by bronze sculptures. Toward the center of the piazza is a more flattering bronze equestrian statue of Cosimo I, again by Giambologna. The Trade Tribunal (Tribunale di Mercanzia) of 1359, from which trade was regulated and merchant disputes settled, is located at the short end of the piazza. Emblems of the guilds appear in a frieze above the second story of its facade.

"Epoca" is a new designer label vintage shop at Via dei Fossi 6r (near Piazza Goldoni). Epoca has all kinds of clothes, shoes, hats, bags, etc. from leading Italian designers, like the beautiful Pucci blouse we saw in the window there last week. Although the global economic situation has definitely affected Florence, and many stores have closed (and continue to close!) there are also new things like this popping up in different spots all over town, which is great to see. Via dei Fossi is a very fancy street filled with antique dealers and high end carpet and home furnishing shops - it is neat to have a store like Epoca in the mix there. 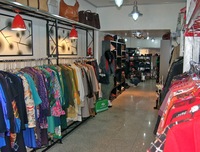 Pictures from the Vasari Corridor

This morning we had a private tour of the Vasari Corridor with a guide from the Uffizi, Patrizia, who was very knowledgeable and greatly added to the experience. This is something I have wanted to do for a long time, and it was really a fantastic tour. The collection of self portraits in the main corridors is unrivaled in the world. They also keep a damaged painting from the bombing of the Uffizi in May, 1993, on a landing in the stairs leading down to the corridor as a remembrance to those who died. There are some other paintings and sculptures in the corridors leading to and from the main passageway over the river that are worthwhile also. After crossing the river you see the private balcony of the Medici's in Santa Felicita, and are let out into the Boboli garden by a little door just to the left of Buontalenti's Grotta Grande. 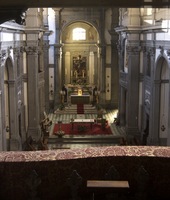 You are not allowed to photograph the collection - all the shots above are from the windows along the way. 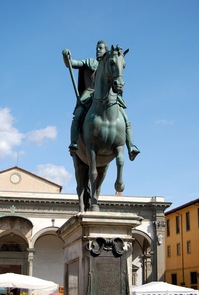 For centuries, March 25th was "Florence's January 1st", the beginning of the New Year. The date was traditionally used in liturgical calendars and thus spilling over to "civic" use placing the Annunciation as the first day of the year.

According to oral tradition and the medieval manifest the Golden Legend, the first written account of the lives of the Saints by the Genovese Bishop Jacopo da Voragine, the angel Gabriel announced to Mary her chosen role as the Mother of Jesus on Friday, March 25th at noon (nine months before Christmas day) while Mary was piously reading the Book of Isaiah that prophesizes the conception of Jesus, "Behold, a virgin shall conceive, and bear a son, and shall call his name Immanuel."

This important liturgical feast day then acted for many centuries as the beginning of the New Year, however by the sixteenth century even the Church was striving to gain a better understanding of the tropical calendar and the seasons for the "placement" of Easter. It was Pope Gregory XIII in 1582 who was driven to update the calendar to create a "universal" placement of Easter which was not celebrated on the same date by all Christian communities and approved the calendar as we know it today. This is a scan of a tourist map of Florence from what appears to be a turn of the century guide book. It may be from a Baedeker's guide.

Palazzo Strozzi was begun in 1489 by Benedetto da Maiano for Filippo Strozzi, a rival of the Medici who desired to have the most magnificent palace in the city. Filippo Strozzi was left in ruins by the cost of the project and died in 1491. The palazzo was eventually finished in 1538 by Il Cronaca (Simone del Pollaiuolo).

Today the Strozzi houses 2 separate exhibition spaces (the main space, and the Strozzina in the basement) with rotating exhibits (3 a year), a brand new cafÃ©, administrative offices, and a library. 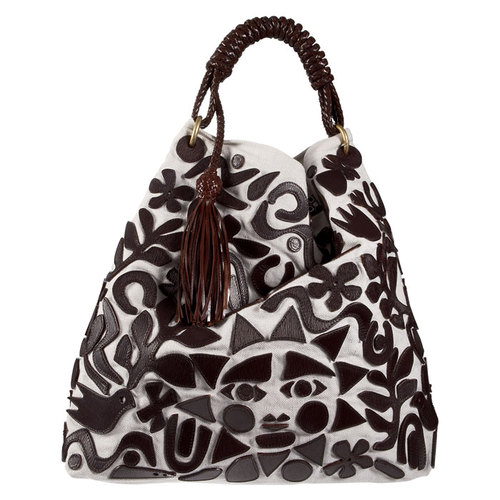 Luxist.com is reporting that this stylish bag is made in Florence:

"Melissa Loyd Maish, the former creative director of Bally, has her own line of purses. The atelier is based in Florence, Italy and the line features luxe looks in leather and linen. My favorites are the Sunset models, adorable linen bags with leather appliquÃ©s shaped as birds, suns and other organic shapes. The tote is white linen with brown leather and sells for $770."